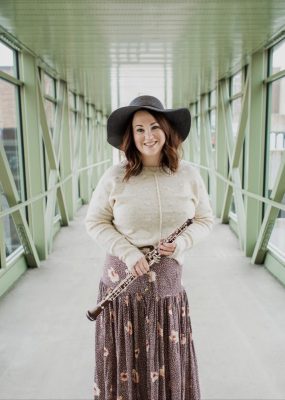 A Kalamazoo and Portage native, Caitlin Kramer excitedly joins the Kalamazoo Children’s Chorus for their 2021-22 as Program Manager and also a proud Chorister Parent!

Caitlin graduated from Portage Northern High School where she was a member of the Wind Ensemble, Song Leaders Chorale, Symphony Orchestra, and numerous Musical Theatre Pits. While growing up in the area, she was a member of Kalamazoo Junior Symphony and attended SEMINAR Summer Music Programs at Western.

Caitlin attended DePauw University where she obtained a Bachelor of Music degree in Oboe Performance and continued studies at The San Francisco Conservatory of Music where we completed a Master’s Degree in Oboe Performance as well, studying with San Francisco Symphony oboists and also participating in the Conservatory in the Schools outreach program which took her to area schools to help young oboists.

For over a decade, Caitlin lived, taught and performed in Las Vegas. Over the course of her tenure there, she not only performed in area orchestras, but also very often in orchestras on the Las Vegas Strip backing celebrities like Hugh Jackman, Johnny Mathis, Il Divo, Andrea Bocelli, Amy Grant, Seth MacFarlane, Weird Al Yankovic, and MANY more!

A dedicated teacher, Caitlin has always kept a private studio of Middle and High School oboists which are her absolute favorite to teach because of their enthusiasm, energy, and willingness to learn.