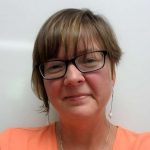 Ms. Colgren is the Finance Director for Drug & Laboratory Disposal, Inc. in Plainwell MI. Prior to that she taught Accounting at both Western Michigan University and Kalamazoo Valley Community College. She has been an active board member of the Kalamazoo Children's Chorus since 1999 and has filled many roles within the organization during that time. Ms. Colgren is a Notary Public for the State of Michigan, a member of the Gilmore Car Museum and lives on the outskirts of Kalamazoo near Plainwell. 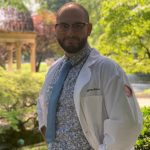 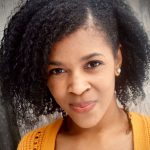 As an alumnus of the Chorus, Bri is excited to be part of the board.  Graduating from WMU with a bachelors in English/Secondary Education, she happily is taking on the secretary position.  Bri has appeared in over 30 theatre productions, among her favorites being "Tick Tick Boom!" (Susan) and "Once on This Island" (TiMoune) with the Kalamazoo Civic Theatre. Bri is also a teacher at Hillside Middle School and is very active inside of our community.

Adjunct Assistant Professor at Western Michigan University, Dr. Rhea Olivaccé,  soprano, is known for her “wonderfully warm lyric soprano voice.” She has performed the  leading soprano roles of Tatyana in Tchaikovsky’s Eugene Onegin and Mimi in Puccini’s La  Bohème, both conducted by Martin Katz at University of Michigan–Ann Arbor. Other roles at  UMAA include La Contessa in Mozart’s Le Nozze di Figaro and Suzel in Mascagni’s L’amico Fritz. Being from the performing arts, she offers an exciting perspective for the chorus and a lot of knowledge.

Jane Pearson graduated from Central Michigan University earning both Bachelor’s and Master’s degrees in Music Education with a vocal focus. She taught music in the public school systems of Mt. Pleasant, Alma, and Plainwell area schools, as well as teaching at Kalamazoo Valley Community College. She has received certification for Level III in Orff-Schulwerk and Level II in Creating Artistry Indianapolis Children’s Choir. Jane is a former director of Prep and Concert choirs for Kalamazoo Children’s Chorus, as well as being a former accompanist as well. While working as a public school teacher, Jane also served as Secretary for the Kalamazoo Area Music Teachers Association. We are fortunate to have not only a former KCC director serving on our board, but also one who is a caring Mother, and Grandmother to a musical family. 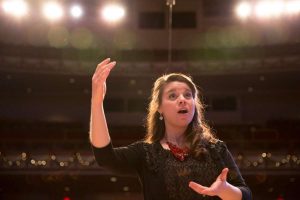 Taylor Gudbrandson is a vocal music educator and Mezzo-Soprano in the West Michigan area. After receiving her Bachelor of Music Education in 2013 from Central Michigan University, Taylor taught Middle School and High School Choir at Otsego Public Schools for seven years as well as serving as the Bella Voce director for the Kalamazoo Children’s Chorus- an organization which she sang in herself as a growing musician. KCC was an integral experience that inspired her to become the choral director that she is today. During the 2020-2021 season, Ms. Gudbrandson stepped back from the public schools to take on the role of Artistic/Executive Director for the Kalamazoo Children’s Chorus. She is eager to carry on the legacy of excellent choral music while also stressing the importance of community and togetherness that choir can provide. In addition to working with hundreds of students each year, Taylor enjoys performing onstage at The Kalamazoo Civic Theatre as well as other featured solo work in the area. 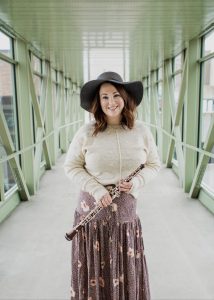 Caitlin attended DePauw University where she obtained a Bachelor of Music degree in Oboe Performance and continued studies at The San Francisco Conservatory of Music where she completed a Master’s Degree in Oboe Performance as well, studying with San Francisco Symphony oboists and also participating in the Conservatory in the Schools outreach program which took her to area schools to help young oboists.

For over a decade, Caitlin lived, taught and performed in Las Vegas. Over the course of her tenure there, she not only performed in area orchestras, but also very often in orchestras on the Las Vegas Strip backing celebrities like Hugh Jackman, Johnny Mathis, Il Divo, Andrea Bocelli, Amy Grant, Seth MacFarlane, Weird Al Yankovic, and MANY more!

A dedicated teacher, Caitlin has always kept a private studio of Middle and High School oboists which are her absolute favorite to teach because of their enthusiasm, energy, and willingness to learn. Caitlin now performs with the Kalamazoo Symphony, Battle Creek Symphony, West Michigan Symphony, South Bend Symphony, and other area groups on Oboe, English horn, and Oboe d’amore in addition to being a full time Mom to her sweet, musical son Noah.

Hannah is a vocalist, instrumentalist and passionate music educator for children in many  venues. While earning her bachelor’s degree in music education with a choral emphasis from  Western Michigan University, Hannah performed leading opera roles and won classical  vocal awards with the National Association of Teachers of Singing. After graduating from  WMU, Hannah taught choir and general music in a variety of public schools in Michigan,  gaining experience with Pre-K through 8th grade students, while maintaining a steady private  music studio. Hannah has fifteen years of experience playing with, singing in, or directing  ensembles at large churches in the U.S. and abroad, as well as at camps, including WMU’s  Seminar. In addition to conducting KCC’s preparatory choir, Hannah enjoys directing the staff  and students of Calvary Bible Church’s large elementary children’s choir in concerts and fully staged musicals. Hannah continues to run her own private studio which she established in  2004, offering instruction in voice, piano, guitar, ukulele, and early childhood music. 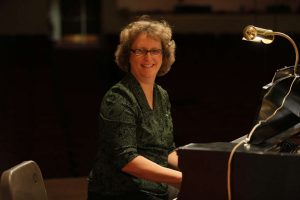 A piano teacher and has been the accompanist for the Kalamazoo Children’s Chorus since  2003. She has worked in several other choirs during her tenure with KCC. Patricia has spent  nearly her entire life in Kalamazoo. She graduated from Kalamazoo Central High School and  received her Bachelor of Music degree from Western Michigan University. Patricia is also a  much sought-after performer and a private piano teacher.

Having sung in a boychoir growing up, Jake was happy to join the Kalamazoo Children’s Chorus staff in the fall of 2021 where he accompanied our beginner choir under the direction of Hannah Robinson as well as collaborating with several student soloists throughout the season. Jake graduated Western Michigan University in December 2021 with his Bachelor of Musical Arts, focusing on piano and accompanying. Additionally, he accompanied Portage Public Schools from 2018-2019. 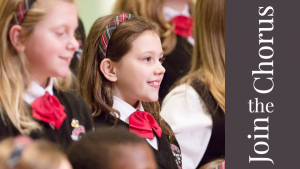